You can explore the world within your pockets, and you can take that in a literal sense. Our technology has evolved to the point that we can do anything with our smartphones. We can take pictures with it. Communicate with loved ones that are miles away. There are countless possibilities, but perhaps the most important part of this technology is that you can learn from it.

This will be the main topic of this article, the best app to learn Portuguese available on both iOS and Android devices. With that said, let’s take a look at our first entry. 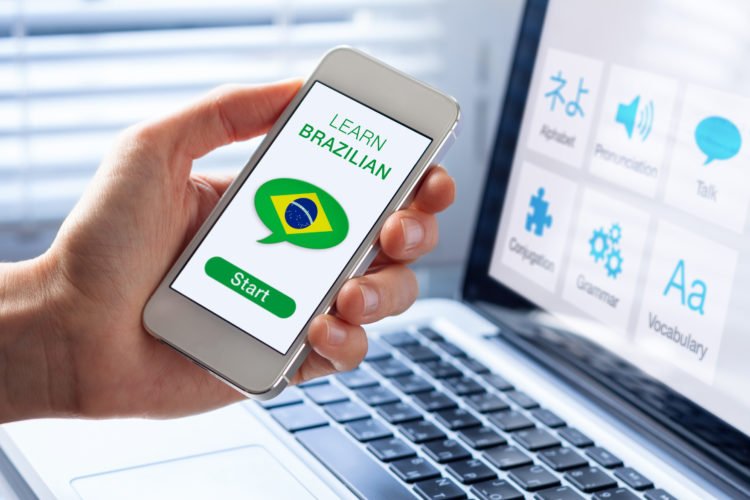 Our first entry is WordReference, which might be familiar to you as one of the most popular dictionary apps there is on the application market. WordReference was originally just a website by the WordReference group. So technically, it is an app adaptation and you can access the features from the WordReference.com website.

It may not be a language app, technically speaking, it is still worth trying out. There are two main reasons why we recommend this as the best app to learn Portuguese.

For one, it is capable of teaching anyone regardless of nationality, since it can translate words from all languages into Portuguese. Of course, the English-Portuguese section is much more profound, but other languages are included, too.

Secondly, there is a forum wherein you can ask questions about the Portuguese language. There are many things you can do with the forum. Either way, it’s up to you how you take advantage of it. Just remember that the forum alone is enough to consider WordReference as the best app to learn Portuguese.

Another popular app is Anki, best known as a flashcard app. Again, it is not a language app but is still able to deliver great results to users when it comes to being the best app to learn Portuguese. Just like WordReference, Anki is also originally a website and is now adapted as an app for iOS and Android, and even software for Windows and Mac.

It is often used for memorizing things for many reasons. To begin with, users can create their own flashcards which they can view anytime in their smartphones. Other users may also create flashcards and share it with others. This makes it one of the best app to learn Portuguese since Portuguese users often create phrases and words so that non-native speakers can learn in their own ways.

Additionally, the flashcards are not limited to text only. The users may also contribute by recording audio and sharing them with others. This can include any audio as long as it is information, so Portuguese lessons may also be recorded. In fact, the Anki website and its app counterpart already have thousands of Portuguese flashcards available, some are audio and some are text only.

You may already know Google Translate as the feature in the Google Chrome browser. As luck would have it, it has an app and it even made it to our list of the best app to learn Portuguese. Just like all the other apps here, it is available on both iOS and Android. It is similar to WordReference, but there is a difference, of course.

The only downside to this is that it’s not exactly accurate, per se, just like any other online translators. Regardless, it should prove to be very helpful either way especially if you are only trying to learn Portuguese one phrase or one word at a time.

Another app that is capable of teaching you Portuguese is Busuu. This time, it is actually an app that was made specifically to learn different languages. But again, it was originally a website or community but is now developed into an app. It has garnered praise from many organizations and even went as far as to be included in the Editor’s Choice of Google Play Store.

Basically, it contains lessons and exercises to help users learn different languages. Currently, it has thousands of lessons including those for Portuguese, making it one of the best apps to learn Portuguese.

Those lessons can either be mostly text or contain pictures on it, making it more comprehensible for the users. In addition to having customized lessons and exercises, there are hundreds of millions of native speakers for specific languages.

They, too, can contribute to the learning experience of users by providing feedbacks and even tips, if necessary. These native speakers are technically obliged to teach you how to speak Portuguese, especially if you have a premium subscription. Lastly, since it is a community, you may also contribute by submitting the lessons that you think will help users understand the language more.

As the name suggests, FluentU is also another language learning app. There are, however, differences between this and Busuu. As usual, FluentU is originally accessible only from a website, and you can get a 14-day free trial by heading there. However, currently, it is already one of the best app to learn Portuguese.

What sets FluentU apart from other language-learning apps is the fact that it makes use of authentic videos that can be considered as logs, music videos, shows, news, talks, and more.

These videos can be of different languages and subtitles and transcripts are available for each one of them. We included it in this list of the best app to learn Portuguese because it teaches users different languages while at the same time entertain them with videos.

Every video contains flashcards wherein if you click a word, the definitions, images, and examples that can help you learn the language. Lastly, it can guide you through the lessons with the Learn Mode.

Put simply, it combines entertainment and education, and that is why there’s no wonder it is considered the best app to learn Portuguese by many people. As of now, the Portuguese section is still not completely developed, but it should still serve its purpose.

As the name suggests, Memrise is an app for memorizing things. It is not specifically a language-learning app, but it is a learning app that focuses on memorization. In addition to being an app, there is also an online platform available for users.

So what makes it one of the best app to learn Portuguese? To begin with, it makes use of pictures to make the learning process easier. There are even videos available to users for some lessons.

Additionally, there are games that users can plunge into if they are feeling bored. It is similar to FluentU in a way that it incorporates entertainment with learning. It may also be compared to Busuu since users can enter conversations with real-time users. Such users can help you learn different things, including languages such as Portuguese.

If you don’t want to take too much time learning Portuguese, then we suggest trying out Duolingo, a very popular app for building your vocabulary. Duolingo is an app designed to expand the vocabulary of users. However, as time passed by, it became incorporated with learning different languages and now, it is one of the best apps to learn Portuguese out there.

We mentioned Duolingo as best if you want to learn Portuguese fast for many reasons. To begin with, the lessons are wide-ranging with some being quick exercises.

Some examples of this are the matching type quiz wherein you match Portuguese words to photos. You can also translate phrases or sentences from one language to another. There is also a section where you can listen to vice recordings of Portuguese sentences and analyze them.

Just like how you would search for music, you can search for songs in Sound Hound. Once you do, you simply have to check its lyrics and you will see definitions of each word with their translations.

Of course, this includes Portuguese songs. There are also explanations from other users what each part of the song means. To summarize, SoundHound allows users to enjoy music while at the same time help them expand their vocabulary, and in some cases, learn different languages.

It’s not every day that you get to see something that is worth checking out to enhance your understanding of the Portuguese language. Thus, it’s very crucial that you take advantage of the best app to learn Portuguese as much as you can.

However, while we can’t deny that there are apps like the eight that we discussed, you still need to learn from books since they might contain things not accessible from apps. Either way, this article should help you start your journey to learning Portuguese.